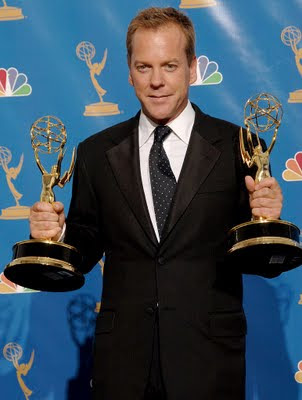 “I am honored to contribute to Norman Jewison’s legacy by offering the CFC my passion for storytelling, for Canada and its talent,” said Sutherland.

“'The Actors Conservatory' will have significant influence on the professional and creative lives of the actors attending and on our industry.”

"With Kiefer Sutherland’s commitment, the Conservatory will not only generate renewed enthusiasm for Canadian actors but will help take our Canadian programming efforts to the next level.”

The CFC Actors Conservatory will offer actors a unique, 'transformative' professional on-screen experience, collaborating with industry experts through a series of workshops/master classes alongside international actors/directors/writers/producers with a primary focus on the acting process.

Designed to build strategic relationships that ensure professional film and television opportunities for CFC actor graduates, a goal of the Conservatory is to systematically build a Canadian star system through a series of star building initiatives.

The other notable announcement made at the BBQ, was an offer of federal/provincial infrastructure funding to construct new buildings for the CFC, according to former broadcaster, Conservative politician Peter Kent, Minister of State of Foreign Affairs ( Americas ) and Liberal George Smitherman, Ontario’s Deputy Premier and Minister of Energy and Infrastructure, with the governments of Canada and Ontario each investing up to $3.25 million towards the project.

“These new facilities for the Canadian Film Centre will provide a home to nurture talent and ideas, promoting innovation and creating jobs in the film, television and new media industries”, said Kent.

“Ontario is proud to be home to the Canadian Film Centre and support a strong presence in the film, television and new media industries," said Smitherman.

“Over the past few years the CFC has grown to be at the forefront of 21st century entertainment,” said Slawko Klymkiw, Executive Director of the CFC.

“With this growth it is important that our facilities complement the excellence of our programs. The Government of Canada, the Government of Ontario and the City of Toronto ’s generous commitments to the CFC are a key component in helping us build a strong foundation and a vibrant future for the talent of this country.”

The project will involve upgrades to existing buildings as well as the construction of three new ones, providing additional space for film, television and new media program activities, as well as hosting CFC and community events.

Total eligible project costs are estimated at $8,950,500, one of nearly 1,200 initiative across the province that will break ground thanks to $1.84 billion in joint federal/provincial funding under the 'Infrastructure Stimulus Fund'.

A charitable not-for-profit organization, the Canadian Film Centre is Canada’s largest institution for advanced training in film, television and new media, committed to promoting and investing in Canada’s creative community...