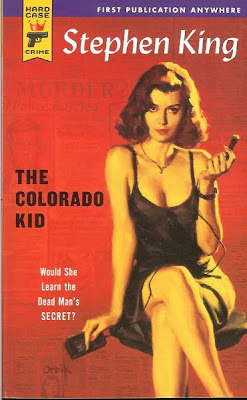 E1 previously set up the Canadian/US series "Copper" for ABC/Canwest and "The Bridge" for CBS/CTV.

"The Colorado Kid" mystery novel was first published in a 2005 paperback-only edition, written by King for the 'Hard Case Crime' imprint.

The third-person narrative concerns the investigation of the body of an unidentified man found on a tiny island off the coast of Maine. Lacking any identification or obvious clues, the case reaches nothing but repeated dead-ends. Well over a year later the man is identified, but all further important questions remain unanswered. The two-man staff of the island newspaper maintain a longstanding fascination with the case, and twenty-five years later use the mysterious tale to ply the friendship and test the investigative mettle of a postgrad intern rookie reporter.

The Colorado Kid was the first King novel published after the finale of his "Dark Tower" series...