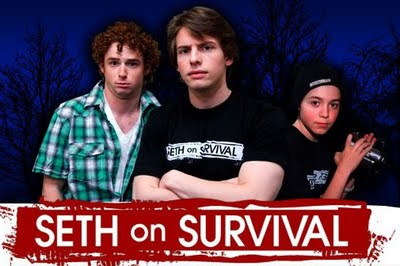 Produced as five 5-minute episodes for online distribution, "Seth On Survival", offers to:

"...teach humanity how to survive the dangerous supernatural threats that surround us everyday: werewolves, zombies, vampires, aliens, leprechauns and cyborgs, to name just a few. With the help of little brother Sam and best friend Graham, Seth researches and tests survival myths and tips before passing them on from SOS HQ in Mom's suburban basement. Your survival is virtually guaranteed..."

The CFC TV Pilot Program expands training beyond the theoretical by allowing residents to produce/distribute their original series concepts using the web as a means of showcasing talent/projects to the largest possible audience, and in acquiring a license to produce further episodes of the series, for television/or online broadcast.

The program works with emerging creators to develop and produce up to six 5-minute episodes that represent the look, style, and tone of their shows.

The CFC Pilot Program is funded by The Government of Ontario and supported by ACTRA, WGC, DGC, NABET, and IATSE...