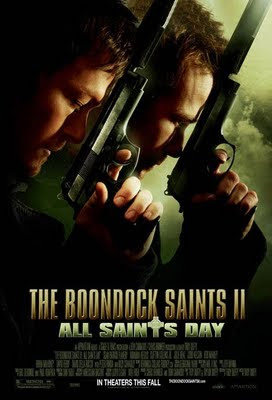 Writer/director Troy Duffy's, Ontario-lensed sequel "The Boondock Saints II: All Saints Day" was filmed in various locations throughout the province including the city of Hamilton, McVeigh's Irish Pub in Toronto, Metropolitan United Church at 56 Queen Street East, Toronto and at the downtown campus of the University of Toronto.

While in hiding with their father, 'Il Duce' (Billy Connolly), the brothers learn that a beloved priest has been killed by sinister forces from deep within the mob and return to Boston to mount a violent and bloody crusade to bring justice to those responsible..."

Click the poster image to enlarge and Sneak Peek the official HD trailer of "All Saints Day".