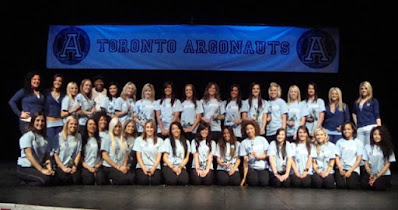 Finals for the 2010 Toronto Argonauts Football Cheerleading competition, took place March 20, 2010 @ Toronto's Cardinal Carter Academy of the Arts, sponsored by the Toronto Sun, with Sneak Peek's Michael Stevens in attendance to shoot all the action:

Starting at 11 AM, candidates performed the 'combination' they were taught at previous Preliminaries, on stage, in front of celebrity judges, before a final decision was made.

Candidates responded to the following announcement, posted at the Toronto Argos website:  "...Perform for over 30,000 fans at all Argos home games. Appear in the stands and on the video screens leading game day promotions. Pose for pictures and sign autographs during and after each home game. Opportunity to be involved in photo shoots. Opportunity to appear on local and national television and radio shows, as well as internet and print media. Lend time and talent at community service events. Bring smiles to kids at the Jr. Cheerleading programs while sharing your knowledge and experience. A possibility to represent Toronto in Moncton, NB for a September home game! A possibility to represent Toronto at the 98th Grey Cup in Edmonton in November!

Click the images to enlarge and Sneak Peek our exclusive video of the March 20 event...