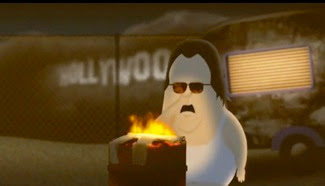 The National Film Board of Canada (NFB) reports that the winner of the 6th NFB Online Short Film Contest @ Cannes, "Crash! Bang! Wallow?", was awarded to Jon Dunleavy and Keith Wilson-Singer of the UK.

This year, the 10 shortlisted films generated more than 2 million views in 14 days – on the NFB’s English and French YouTube channels. This sixth edition was organized by the NFB in collaboration with the Short Film Corner and in association with YouTube.

"...In partnering the contest, the NFB continues to encourage the creators of bold and innovative shorts..."

The public had 14 days to vote online for the best short film on the YouTube site, recording more than 20,000 votes internationally.

Winning short, "Crash! Bang! Wallow?", is an animated film that "...tells the tale of ex-Hollywood stuntman 'Larry LeTan' and his fight to find a place in the modern world..."

Filmmakers Dunleavy and Wilson-Singer will receive a digital HD video camera and laptop computer from the NFB.
Short films that came in second, third and fourth place are "Love and Theft" by Andreas Hykade (Germany), "The Technician" by Simon-Olivier Fecteau (Canada) and "The Story of My Life" by Pierre Ferrière (France).